Popular clothing stores close due to virus - Retailers Country Road, Mimco, Politix, Trenery and Witchery will close their door ...
"Toughest quarantine measures in the country" - Premier of Tasmania Peter Gutwein speaking to media ahead of the Council of Aust ...
Woman coughs, spits on NSW police officer - A woman has allegedly repeatedly coughed and spat upon a police officer in Sydney' ...
How to survive COVID-19 without your salon - The sudden government-forced closure of beauticians to stem coronavirus has thrown ...
Man tackled after attacking 94yo in Sydney - A man who allegedly pushed an elderly woman to the ground in Sydney's CBD has been ...
UK PM working after contracting virus - Prime Minister Boris Johnson is still able to work in an office and study at No 11 ...
Hundreds report NSW isolation disobedience - Hundreds of concerned people have been dobbing in their neighbours for flouting co ...
Myer shuts stores in wake of COVID-19 - Retail giant Myer will close all of its stores and stand down about 10,000 staff w ...
UK fireys to deliver food, collect bodies - The UK will use firefighters to help deliver food, retrieve dead bodies and drive ...
NSW lockdown inches closer as cases climb - Coronavirus cases in NSW without a clear source of transmission are on the rise, n ... 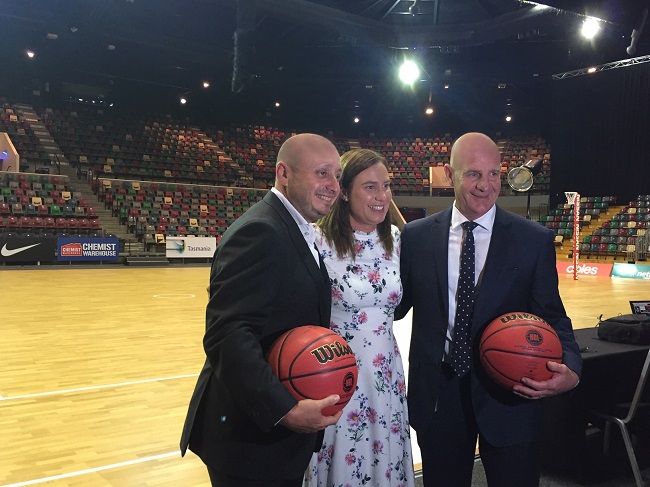 After a 24-year hiatus from the National Basketball League, Tasmania will finally be returning.

At a special Glenorchy City Council meeting this afternoon, aldermen unanimously voted to sell the Derwent Entertainment Centre to the state government for approximately $8 million.

Around $40 million of taxpayer money will be used to bring it up to premier basketball league standard, allowing a licence to be granted and a 10th team to enter the competition for the start of the 2021-2022 season.

NBL Owner Larry Kestelman will lease Wilkinsons Point from the government and build a $200 million retail, restaurant and hotel precinct around the site, expected to be well-underway within 5 years.

The site will stay in public hands until Mr Kestelman is ready to make the full puchase.

The project is expected to create around 1200 full-time jobs, adding $102 million a year to the Greater Hobart economy.

Premier Gutwein also confirmed $2 million annually would be chipped by the government to keep the team running.

Launceston will see some action, and other parts of the state haven't been ruled out either.

"We want to make sure this is a team for all of Tasmania," Mr Kestelman said.

"We need to work with the government to make sure the Silverdome is up to standard, but as long as we have what we need to present an NBL game to the world as it should be, we'll take a few games up there."