Tasmania Covid-19 death toll reaches 90 - Tasmania's Coronavirus toll has reached 90. The news follows the death of a wom ...
Man charged after reported food van robbery - Tasmania Police have charged a man, after a reported incident in Tasmania's sout ...
Kyrgios embroiled in spitting scandal - Nick Kyrgios has admitted to spitting towards a "disrespectful" spectato ...
Maxwell gets 20 years for sex trafficking - Ghislaine Maxwell has been sentenced to 20 years in prison for helping the sex off ...
Qld integrity report a 'wake-up call' - Queensland Premier Annastacia Palaszczuk has vowed to implement the recommendation ...
'Stacks of bodies' found in US truck - The bodies of 46 dead migrants have been discovered inside a tractor-trailer unit ...
Two charged over alleged Glenorchy assault - Police have charged two people after an alleged assault in Tasmania's south. It ...
Tasmania's population on the rise - Tasmania's population is climbing, according to the latest Census data. The Aus ...
Free legal advice for child sexual abuse survivors - Victims and survivors of child sexual abuse on the Coast will be able to get fre ...
Coastal cop on assault charge - A 23 year-old Coastal police officer has been charged with assault.   The male ...

Election means tourism funding for some, not for others 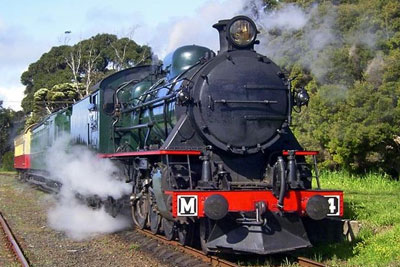 Funding for the Don River Railway's expansion to run steam train trips into the Devonport CBD and the Penguin Market on Sundays now appears in jeopardy following the Federal Election result.

The Liberals promised $10 million to bring the plans forward, but it wasn't matched by Labor.
Instead, Labor promised $12.5 million for Project Far North West at Dismal Swamp as a new gateway to the Tarkine.
West by North West Tourism CEO Tom Wootton is hoping the money for project will flow quickly, but at the same time is disappointed the railway proposal has hit a hurdle.

Mr Wootton says he's hopeful some alternative funding can be found for the Don River Railway.