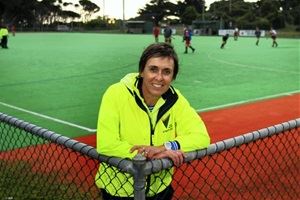 Devonport hockey official Minka Woolley has been named the The Premier's Tasmanian Volunteer of the Year.

The award was announced at the Tasmanian Volunteering Awards in Hobart, where the Governor Barbara Baker hosted the 30 finalists from around the state.
Woolley has a been involved in the sport of hockey for decades, mainly as an umpire and has officiated at Commonwealth and Olympic Games and world championships level, most recently as umpire's co-ordinator at the Tokyo Olympics, saying she's both surprised and humbled by the award.
In other awards, Burnie's Trevor Snooks was recognised with a Lifetime Achievement Volunteer Award for his services to the Cancer Council Tasmania and the South Burnie Football Club, while Toast For Kids Charity founder Steve Martin, of Devonport, received the Education, Science and Technology Volunteer Award