SA to lock down after fifth virus case 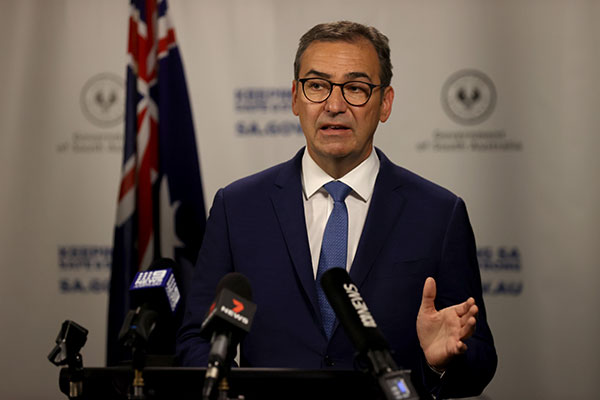 South Australia is moving into a full seven-day lockdown after a cluster of local COVID-19 cases grew to five.

The fifth case, a man in his 60s, is someone who dined at a restaurant in Adelaide where previously infected people were also present on Saturday night.

Those people had all attended a birthday party in a private function room which authorities said had the potential to act as a super-spreader event.

The lockdown rules come into effect from 6pm on Tuesday with South Australians only allowed out for five reasons.

Premier Steven Marshall said it had also been confirmed the current cases involved the Delta variant of the disease.

"We hate putting these restrictions in place but we have one chance to get this right," the premier said.

"We are moving as quickly as we can to slow and stop the spread of this cluster.

"We know these restrictions will take a heavy toll. But we've always had a situation where we go hard and we go early in South Australia.

South Australians will only be allowed out of their homes for essential care, essential work, the purchase of foods and essential goods, for medical reasons and for limited exercise.

As the number of cases and exposure sites continued to grow, authorities said more testing sites would open with the first of those a drive-through facility at Ridgehaven, in Adelaide's northeast.

SA Pathology boss Tom Dodd said as many resources as possible were being dedicated to testing, including a new drive-through site at Ridgehaven in SA's northern suburbs.

He also thanked people who queued for hours for testing, including many who were forced to sleep in their cars overnight.

"It's inevitable whenever there is a case identified there will be a huge increase in testing," he said.

"We don't want people to queue for an inordinate amount of time, so we thank people for their patience."

The outbreak has plunged thousands of people into quarantine with the list of more than a dozen exposure sites including at least four major shopping centres in Adelaide's north and northeastern suburbs.

Chief Public Health Officer Nicola Spurrier said the number of sites would increase on Tuesday as she urged everyone, especially those in isolation, to stay home.

"The virus doesn't have legs, it moves around when people move around," she said.

"So if people stay put we will able to get on top of it."

Professor Spurrier said contact tracing was underway in regard to the fifth positive case which was confirmed early on Tuesday morning.

She said the situation was currently more dangerous than when SA had an outbreak of cases known as the Parafield cluster in November last year.

"It's a very dynamic situation," she said.

The new SA cluster began with an 81-year-old man who entered the country from Argentina, his daughter and another two men.

He had returned to Australia via NSW, where he spent 14 days in quarantine.

He arrived back in SA on July 8 and presented to a suburban hospital over the weekend after developing symptoms.