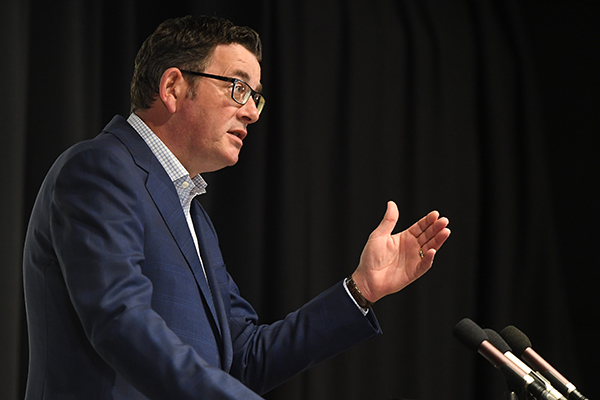 Victoria's mask rules and social gathering restrictions will be eased and workers can return to the office, as the Holiday Inn outbreak is declared under control.

Premier Daniel Andrews has confirmed that from 11.59pm on Friday, up to 30 visitors will be allowed to gather at homes per day, while outdoor gatherings of up to 100 people will be permitted in public places.

Masks must be carried at all times but will only need to be worn on public transport, in taxis and ride-share vehicles, in aged care facilities and at indoor shopping centres and other crowded places.

A density limit of one person per two square metres will remain in place in pubs, restaurants and nightclubs and at beauty services, funerals, weddings and community facilities as long as a QR code system is in place.

Retail businesses will have the same density cap, with electronic record-keeping recommended.

For the first time since the start of the pandemic, 75 per cent of both public and private sector workers will be allowed to return to the office.

Crowds will also return to the MCG and Marvel Stadium at 50 per cent capacity for round one of the AFL.

The settings largely reflect those that were in place across the state at Christmas.

Restrictions were then tightened over the New Year period following the Black Rock cluster, before they were relaxed in late January.

In early February they were tightened again after a hotel quarantine worker from the Grand Hyatt contracted COVID-19.

A week later, the state entered a five-day "circuit-breaker" lockdown, due to an outbreak at the Holiday Inn at Melbourne Airport.

Some restrictions, including mask-wearing and strict gathering limits, have remained in place since the lockdown ended last Thursday.

The state recorded two new COVID-19 cases on Friday, both linked to the Holiday Inn outbreak, ending the state's six-day run of no infections.

Mr Andrews confirmed the cases are close contacts of pre-existing cases and have been in hotel quarantine during their infectious period.

"They pose no risk to public health," he said.

The outbreak, which now totals 24 cases, can be traced back to a family of three staying at the quarantine hotel in early February, who contracted the highly infectious UK virus strain overseas.

More than 3500 close contacts of positive cases have been self-isolating for two weeks.

The state's testing chief Jeroen Weimar confirmed most will end quarantine on Friday.

"This is an example of how we deal with this really complex, higher-risk UK variant outbreak," he said.

"It's obviously a huge reward to Victorians that we've managed to contain this one, bring it back to zero and get us into a better place."

Mr Weimar encouraged anyone with COVID-19 symptoms to continue to get tested.

Some 16,594 testes were processed in the 24 hours to Friday morning.

Meanwhile, federal health authorities are looking at whether 150 doses of Pfizer vaccine have been left at the wrong temperature and are now spoiled.

It's understood aged care residents at St Vincent's Care Services Werribee were vaccinated this week, with 25 vials of vaccine leftover.

The Pfizer vaccine has six doses per vial and is stored at -70C, with logistics company DHL transporting them across the country in portable freezers.

Once removed from the freezer, the unopened vaccine can be stored for up to five days at 2C to 8C and for two hours at up to 30C. It should not be refrozen after thawing.

It's the second possible bungle to Australia's coronavirus rollout, which is in its first week.

Mr Andrews said could not confirm the reports and referred reporters to the federal government, which is in charge of distributing the vaccine in aged care.

He said 2900 shots have been administered to frontline health workers and hotel quarantine staff in Victoria.